The usual two+ week not writing gap continues, only this time I can definitely say it has more than a little to do with the fact that I’ve spent the last two weeks doing a whole lot of nothing (other than reading + workshop rehearsals + occasionally going outside…last week was insanely gorgeous). We’re coming up to the end of spring break here though, meaning that come Monday it’s back to teaching, only this time with heightened levels of senioritis to tackle from my Terminales (can’t say that I blame them though).

I will say though, being outside as much as I have, not just with all the walking I’m doing again, but simple things like reading my books in the park instead of at the library, has been positively magnificent for all the recharging I wanted to do.

For the most part, though, I think the word I’d use to really describe what the past couple weeks have been like is patience. To be more precise: relearning patience. I had spent the better part of a good number of days constantly refreshing my email, waiting for responses/feedback on the new version of my prospectus (yeah, I know, I’m a bit behind…technically…in getting this approved, but that’s what happens when your project gets a much-needed giant overhaul). Thankfully some incredibly constructive feedback came (and honestly, given how I wrote the thing when I was feeling pretty blocked and just sort of hammered things out, I’m surprised that there wasn’t more noticed paid as to how very obviously rushed it was haha), but there was a point where I just had to mentally take a step back and remind myself that I could (I should) just keep pushing on as though getting feedback was a non-issue. We can call this an attempt to regain control over how my life goes.

Thinking back, I’ve also realized I haven’t really been writing too much about my dissertation specifically, which is funny, considering that it’s such a big part of my life right now. Maybe it has something to do with the fact that, other than going to see shows (more on a recent one I saw in a minute), the majority of the work takes place sitting in the reading room at the BNF. Not exactly the most exciting of times.

Really though, it also has to somewhat do with the fact that I’ve always felt a bit nervous about publicly sharing my intellectual/academic work. Call it another manifestation of imposter syndrome, but I’ve always been someone who likes to get this kind of work out little by little to people I trust to give me feedback instead of just shoving it out there like a baby bird out of a nest. This is also a bit funny to think about because when it comes to performing, I literally have no issues putting myself out there, or being vulnerable in front of an audience. Might have something to do with the sense of power that I have doing that. Or if not, then with the fact that oftentimes I still don’t trust words completely to get across what I’m thinking/feeling. I find abstract (or not so abstract) gesture to be more conducive to that, as far as my own means of expression are concerned.

Anyway, on to the show I saw. 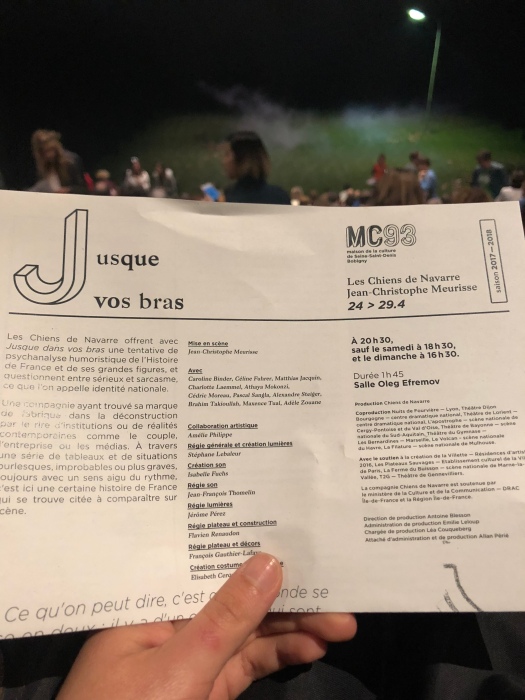 Jusque dans vos bras is a satire on the notion of identity, and French identity in particular. Taking a humorous look back at the history of France and some of its major players, the play puts front and center a question that pretty much characterized the tone of the last presidential elections : what does it mean to be French?

As someone who is definitely not French, I will say it was interesting being in the audience as a sort of outsider, especially given the fact that a good portion of the beginning of the show involved a direct address wherein the audience was (unless I’m misremembering) addressed not only as being of French origin, but also of a certain socioeconomic demographic that is characterized by the fact that they all (myself included here) took the metro from Paris to get to the theatre that evening (the MC93 in Bobigny). Generally though, a good satire should be able to transcend these sociocultural/-ethnic bounds – and I will commend the piece for starting off almost immediately with a sketch that put front and center questions of Frenchness with regards to ethnicity, race, religious affiliation, etc. -, but I’m not entirely sure this one quite got there, given how specific some of its jokes and references were to a certain cultural understanding. Honestly though, I did feel pretty proud of myself for being able to pick up some of the more subtle digs at the current president.

A high point: during one of the sketches (there wasn’t really a through-line in this piece), the actors are wheeled out on a raft, which is then parked up center stage. A rope is thrown out. The actors are tired, weary. One of them stands and stretches out their hand asking for help being pulled to shore (downstage). This, of course, is an explicit reference to the current refugee crisis, but at the same time it also interrogated the relationship and ‘gap’ between the fiction being played out on stage and the audience. After the initial request was made, no one moved. The actor pleaded again for help, and then when no one in the audience still climbed up on stage to grab the rope, said actor, plus a few others, started making cheeky remarks about how heartless everyone was, and really they were sure that being in Bobigny (which is a historically left-leaning area) would mean that people would be scrambling to do something. It was at this point that the audience understood that yes, they were meant to take that step and cross the gap between themselves and the stage, inserting themselves into the fiction being played out before them. And yeah, this is going to be a bit silly, but almost immediately after people scrambled up to help – it never ceases to amaze me how eager people get to participate only the minute they are assured that it’s ok and no, they won’t be breaking any rules -, two other actors wearing silly shark costumes came up to attack. I died.

Oh and at one point there was also an inflatable dancing bull.

« But, Effie, » you might be asking, « they painted their faces/hands red, not black, and besides isn’t there a completely different cultural context here that you have to take into account? »

No, there isn’t. I don’t care if the whole point of the sketch was for skewering white families for taking in immigrants from sub-Saharan Africa (a good chunk of which was, let us remember, colonized by France), and then making backhanded comments to try and demonstrate a level of cultural superiority, thereby in a sense reconstructing the colonizer/colonized dynamic. There are ways to do that without painting white actors’ faces. End of story.

I’m going to end this post with just a short note that on the evening of April 26, I officially added a new restaurant to my list of ones I readily recommend to people who come visit. Unlike the other restaurants on my list, however, this one happens to also be vegan. Given that I always like to be aware of friends’ diet concerns/preferences, I’m more than happy to say that Le Potager de Charlotte is a restaurant that anyone can enjoy!

I’m off to London now to meet a friend for a last weekend of adventure (and rain), which also includes seeing a show I’ve been waiting to see for years. Three guesses as to which one…