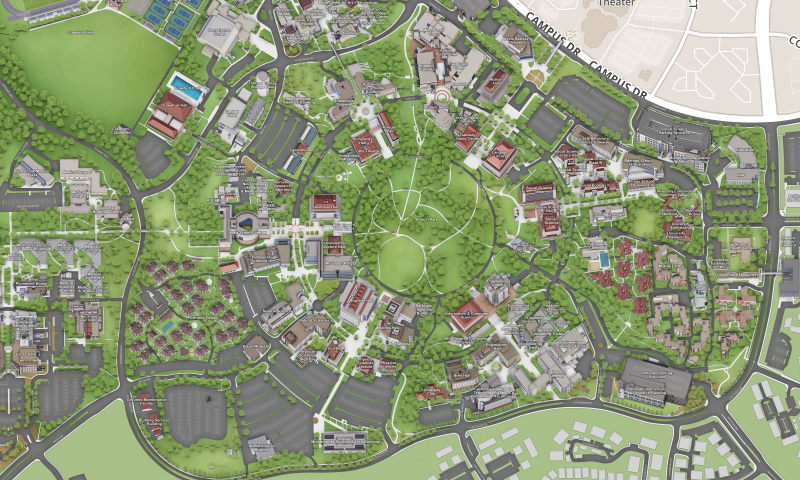 This is a map of UC Irvine.

For those unfamiliar with the campus, let me briefly break this down for you. Built in the mid-1960s (right around the time when student demonstrations on other UC campuses – notably Berkeley – were at their peak) UC Irvine is located in what was once a lot of open land. As such, the good people of the Irvine company had the freedom to construct not just the university but also its immediate surroundings in a way that, to a certain extent, responded to a growing need for a restoration of order on otherwise fraught college campuses.

Organized in a ring, the different departments and schools of UCI are notable for their detachment from each other. Indeed, rather than evoking an image of unity, the ‘rings’ of Irvine’s campus give more the impression of a panopticon than anything else. Although there is no looming tower in the center of this circle – as one would find in Foucault’s description of the panopticon in Discipline and Punish – the park at the center of campus presents its own set of conundrums. Although it is quite sizeable and provides plenty of space for picnicking and other outdoor activities, it is also very hilly. The walking paths shown in the picture kind of suggest this, but what this essentially leads to is a park with no ‘center’, that is, no point of convergence. I remember when I took my first tour of the campus before becoming a student back in 2008, our guide evoked the image of the campus layout resembling a bike wheel (a reference more to the fact that the school really, really wanted people to bike more, rather than to its having an actual cycling culture). Thing is, though, even the spokes on a bike wheel – what keeps its structural integrity intact – have a central point where they all cross.

The problem of the lack of centrality on this campus became very clear during the recession and the resulting exhorbitant rise in tuition fees. As with the other UCs, there was a mobilization effort on campus, but unfortunately, our efforts never took off to the extent of those in Berkeley or, memorably, UC Davis. This could be attributed to several factors, but here are a few I stand by:

1. The isolation of the different departments in distinct buildings, although common on many American campuses, created here a sense of ‘each department as its own island’, further emphasized by the fact that, given the circular structure of the campus, there was always a sentiment of someone watching.

2. Returning back to the park, the lack of centrality meant that there really was no natural ‘meeting point’ for students (and some faculty) to gather during demonstrations. Demonstrating on the steps of the admin building worked fine for a bit, but its location as a sort of offshoot of the greater ‘Ring Road’ made it a somewhat inconvenient place to get to for students in classes on the other side of campus.

3. What the Irvine company decided to build in the immediate surrounding area. Although we had a small shopping center just across one of the bridges leading to campus, the immediate area around UC Irvine was taken up by residential developments. Condos. Apartment complexes. Not occupied solely by students, but by private families as well. There were no student bars (the exception being the on-campus pub, but even they had to defer somewhat to campus rules regarding opening/closing times), coffee houses were pretty much various locations of impersonal Starbucks and Peet’s coffee, and in order to get anywhere of interest, one had to drive. In short, this was the anti-college-campus campus.

I bring this up because I could not help but think back to this last night after the show I saw (the title is actually a quote from architect Emile Aillaud and is rather long, so I’ll just let the photo speak for itself):

Much like the last show I saw at Le 104, this show centered around a group of three ‘researchers’, this time interested in the architecture of the grands-ensembles – also known as the ‘cities’ of the Paris suburbs (banlieu) built starting in the early/mid-1960s as a response to a need for more housing (because, surprise, when your government starts calling for people to make more and more babies, eventually, these babies and their families will need homes). Originally populated by working class families, including a large number from Southern Europe (Italians especially made up large portions of the construction crews) and designed to be close to whatever factory the men of these families worked in, the reputation of the grands-ensembles did not take long to deteriorate. Instead of being heralds of the future, the cities were cold, impersonal, lacking life, isolated from the hustle and bustle of the city. As the years passed, the conversation around the banlieues shifted to them being sites of urban tension, of violence, of upheaval (and yes, there is a racial element associated with this, in case you were wondering).

Anyway, back to the show. The first thing that was remarkable about this performance was that, for once, it was not frontal. Instead, it was a theatre in the round (well, 3/4 around) with the playing space in the center containing a set of white cubes (seen in the picture above). During the opening of the show, the cubes were organized in a way that four of them made a center ‘block’ and the rest were posted in sort of ‘tower’ formations in the four corners of the space. In other words, the space was centered, organized, we could easily create a relationship with it.

Then the actors start recreating, rebuilding, reconstructing, deconstructing, the various evolutions of one of Aillaud’s designs for the grands-ensembles. Suddenly, the center exploded. No longer stable, the blocks were set in serpentine positions, creating a sort of labyrinth on the stage that, to those of us in the audience, changed the way we related to the space in front of us. No longer part of a shared ‘laboratory’/research space as in the beginning, we were now almost god-like, looking down on this aesthetic achievement below us. Meanwhile, the actors themselves weaved around not only the blocks in the center of the room, but the spaces, the gaps between the banks of seats, the sound design at times making it difficult to pinpoint exactly where one of them was at any moment. And as they, with their literal and figurative acts of destruction and construction, traversed through time to try to puzzle over how or what to make of these constructions today, the absence of the voices, the bodies, of those living in the grands-ensembles became more and more evident. For once, I think the deliberate exclusion of certain bodies (not just voices, but physical, present bodies) worked very effectively here. Indeed, at the end of the play, we see the actors in the process of creating their own ‘micro city’, designating certain blocks as community centers, pharmacies, cultural centers, parks, etc., when one of them, in the closing lines, asks:

“And what about the residents?”

That, I think got to the crux of the matter. These cities were designed with aesthetics, rather than livability in mind. Is this not what happens, though, when urban spaces are designed entirely artificially instead of allowed to grow somewhat organically, when space overly tries to dictate what its inhabitants do and how? This search for an architectural utopia lead to the sacrifice of the human, the mortal, lived element. Despite what is implied in their name, these grands-ensembles were not designed for community, neighborly living (then again, when one thinks about when they were built and who they were originally built for – to say nothing of who is “relegated” to live there now – it is not hard to see why a more divided, sequestered population would be ideal).

This, really, is what brought me back to my days at Irvine, and I’m pretty sure I talked the ear off the friend I went to see the show with about that! Otherwise, I don’t know if I can say enough how positively refreshing it was to see a troupe propose a different interpretation of the playing space, not just in terms of simply not being frontal, but something that finds the gaps in the structure, that makes the space almost alien, strange, uncanny.

Tonight I saw another show, Tue, hais quelqu’un. It was fine. There was a point where they overlaid images of the actors over their bodies, which created a really cool painterly effect, further amplified when the actors began ‘manipulating’ their images through gesture.

Clearly, however, my mind is occupied by other things.