I have a tendency at times to get a bit restless. The downside of this is that in moments where I’m hitting a block mentally, my mind tends to race in about as many directions away from what I want to focus on than I can possibly imagine. Normally, when a situation like this hits (like it did this morning when I was staring at my conference paper draft that I knew I needed to add…something to, but could not put my finger on what), I tend to seek solace not just in my usual walks, but in something more intellectually stimulating. 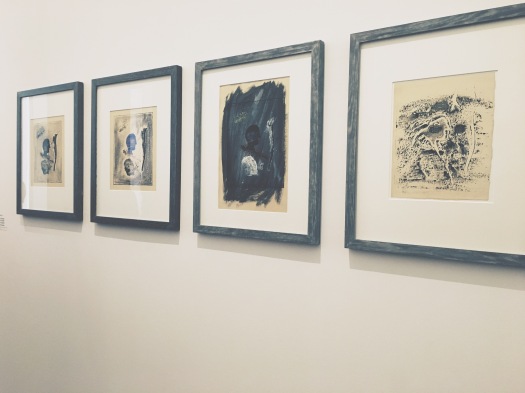 And, as these things usually go, I think that may have worked.

I’m not an art expert by any means, but even I can say that the praise surrounding this exposition is not entirely unfounded. The whole thing is laid out like a sort of calendar/journal tracing Picasso’s life and art in the year 1932, with letters, newspaper clippings, posters and personal photographs interspersed amongst the paintings themselves.

And I’m not sure if this had anything to do with why I left with such a good impression of the exhibit, but I couldn’t help but freeze momentarily when, after stepping into one of the exhibit rooms, I came face-to-face with this :

If you are familiar with Hokusai’s “The Dream of the Fisherman’s Wife”, maybe you’ll agree that there is something about this piece that harkens very strongly back to it. Or at least, I thought so. There was just something about the way the female body has become so refracted, so broken down, reshaped and manipulated that it regains a sort of animalistic quality as it reaches back to envelop the head in repose that I could not look away from for what seemed like the longest time. In any case, I think that somewhat snapped me out of my tailspin because I went through the rest of the exhibit with an almost clear head (let’s be honest with ourselves, my mind is never not racing on something, but better one or a few things than a hundred).

The rest of my afternoon before my 5pm tutoring session consisted of stopping by the FNAC to pick up a book recently recommended to me (a French translation of an Icelandic novel) and then grabbing a quick snack before having to stop myself from getting too far into the book too quickly. Yes, this is a legitimate problem.