I find it almost fitting that my first post back from an unintentional hiatus arrives on the official day of la rentrée, which also happens to coincide with Labor Day back in the US, and, since today’s only dedicated to the students’ orientation, I just so happen to not be working. That, of course, will change tomorrow, but until then, I’m going to take advantage of these last few free hours available to me to remember what feeling moderately relaxed is like.

I say “moderately” because while this summer was, by and large, wonderful in terms of getting away from things for a while (more on that in a bit), I did nevertheless dedicate a large chunk of it to writing—just not on this blog.

For those who want to know, at this point, the status of my dissertation is that I have first drafts completed of every single chapter exceptmy introduction (and conclusion, though what form that thing is going to take is up in the air right now). Arriving to this point was one of my primary goals for the summer (though it remains to be seen as to how goodor usableany of the things I produced/added will end up being…the joys of writing never end), and a good bit of that was completed in the course of lazy afternoons in my family’s beach house in Greece as well as at my mom’s village. Everything has pretty much been sent off for looking over; the only thing left now is to wait for feedback. To be honest, the more I think about it, the more I’m starting to realize that thisis perhaps the primary source of my anxiety with regards to this whole endeavor: the waiting.

But enough of that. Time for a quick summer recap.

I’m going to focus on my time in Greece this year for most of this—as I did spend about a month there—, but before then, a quick shout-out to the quick pre-holiday holiday I took to Valbonnais, a small mountain village a couple hours outside of Grenoble. A good friend had invited me to her family’s house there for a sort of “writing/working weekend”, and I’d say that the fact that I managed to churn out about 10 new pages while editing old stuff—all without an internet connection—is evidence enough that, as far as working weekends go, this one was pretty successful. 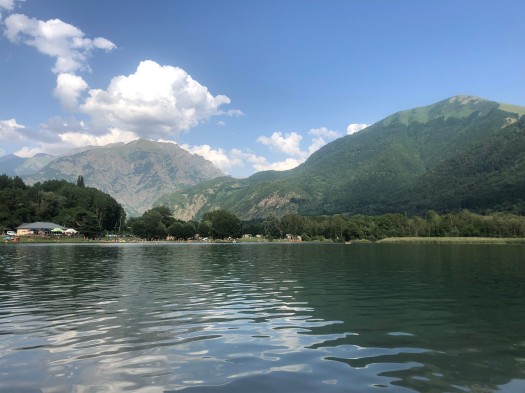 As usual, however, the majority of my vacation was spent in Greece, and honestly, at this point, to notspend a good amount of my summer there would feel almost wrong. It was just my parents and I this time around (the joy of having a sister who has just started her medical residency and is too busy literally saving lives to come and hang out at the beach…so rude… /s), but though this holiday wasn’t exactly party-crazy, we still had a quite lovely time. I would like to think that this is in large part due to the decision—on my recommendation, based on the advice of some friends—to start our trip with a couple of days on the island of Sifnos.

Like the majority of the Cycladic islands, the terrain here is more rocky than lush, but unlike some of its sister islands (looking at you, Santorini and Mykonos), Sifnos hasn’t been completely overrun to the point of getting nonsensically expensive—yet. While we all wait for that inevitable chain of events to take place, I would just like to say, in full confidence of the fact that the readership here is low enough that the effects of my pronouncement will be more or less inconsequential, that everyone who has the means to should go to Sifnos.

You want quiet but then a chill, not super crazy/insane nightlife? Sifnos has that.

You want clean beaches, including an organized beach at the port which is surprisingly impeccable, given its location? Sifnos has that.

You want cute little towns with whitewashed houses, but without the nonsense of Santorini? Sifnos has that.

But most importantly, you want to eat damn well and not have to clean out your bank account to do so? Sifnos definitely has that.

Sifnos has been something of a culinary destination for a while, given that there are several Greek chefs who were either from there or have worked there, in particular, Nikolaos Tselementes, a native of the island who, in the early 1930s, published the first complete cookbook in Greek. The island’s reputation for quality, but also simple, not terribly fussy food is more than well-deserved, and successfully highlights the things I love most about Greek food: fresh fish, an abundance of seasonal vegetables and legumes (I think I’ve said this before in another post, but to reiterate, Greek food is traditionally much more vegetable-oriented than all the gyro stands one sees Stateside and elsewhere would have you believe), and a focus on highlighting the products being used rather than trying to mask them. In short, I ate incredibly well in Sifnos, from the grilled red porgy at the fish taverna near our hotel (where, and this is a rarity, the people running the taverna are also the ones who get up at 5am to go out in their boats to catch the day’s offerings), to the amigdalopita—almond cake soaked in syrup—with almond ice cream from a café/patisserie that also offered Paris-Brests that were literally the size of a bicycle wheel rather than the mere suggestion of one, to, last but certainly not least, the creamy revithada—chickpea stew—one of the island’s signature dishes, and the source of my newfound appreciation for chickpeas. It’s not that my love for them was ever waning, but something about having them in this format, where they were the literal stars of the show rather than just a base for a soup or curry, shifted things a bit. Suffice it to say, I will most definitely be making this come later this fall/winter, thanks to my newly acquired clay pot (yeah, Sifnos is also known for its ceramics).

Beyond that, the rest of the vacation went more or less the way these things usually do. My mornings started at the beach at 09h00 when there was literally no one, then came a late lunch, then work (yay), dinner, sleep, repeat. In between, there was also an excursion out to Epidavros to see Ivo van Hov’s Éléctre/Oreste—which also marked the first time that the Comédie-Française performed in that venue—, some quick evening trips out to Spetses, and figs. So many figs. Thankfully, we actually managed to make jam with them this year (and I got to take a jar home with me) instead of just staring at the ever-growing pile of collected figs toppling over the sides of what we assumed would be an appropriately large enough bowl to hold them, wondering how in the hell we were going to manage to eat these.

Yes, everything was lovely. I even had a little victory moment on the balcony at the house in my mom’s village when, after an entire day of writing like a maniac, I managed what I thought was impossible and met my writing goal. I felt good. All I had left to do at that point was plan my lessons for my classes this year (which I did after I got back). The rentrée and the end of summer were approaching, but I was feeling pretty good.

And then, in Athens, the afternoon before I was to leave, I got a call from my landlord.

I thought this was a bit strange, since usually we are only in contact once every six months or so when I relay the water meter readings to her. As, however, our building was in the process of getting new electric meters installed in every apartment, I figured this may have had something to do with that (I had already called the service in charge of that and rescheduled to have someone come by when, you know, I was actually there to let them in, but one never knows in France…). Oh, how very wrong I was.

Now, fortunately, this post is not going to end with me finding out I’m getting evicted or anything. No, instead, we will end by commemorating my new induction to a club I never really wanted to be a member of. Yes, everyone, as of August 21, 2019, I have now joined the ranks of Paris residents who have to deal with the nonsense of a water leak.

Thankfully, nothing exploded or anything (dear god, the situation would have been sososososo much worse if that had happened). No, what happened was that the glue on one of the connecting pipes out of my water heater had worn off, and so the water—which I had neglected to turn off, since I don’t have the habit of doing that anywhere except in Greece since when I leave there, it’s with the understanding that I won’t be back for another year—had just been slowly dripping down on my counter. For about a month, would be my guess. Long story short, my downstairs neighbor (who as it turns out, is an incredibly nice and understanding human…thank goodness) noticed water stains on his bathroom walls, deduced—rightly—that it was coming from my place, relayed that info to our building’s guardienne, who called my landlord, who called me.

So, needless to say, me coming home was a bit of a stressful situation. Thankfully, renter’s insurance is mandatory here, and given the cause of the damage, I do not have to do or pay anything. My bathroom is going to have to undergo a bit of work (side note: who thinks it’s ever a good idea to put hardwood floors in a bathroom?), but hopefully that won’t take an insanely long time. In the meantime, the source of the leak has been fixed, and the fruit flies that also decided to invade my momentarily moist house have also been mostly destroyed.

In the meantime, I’ll be back on here soon enough blogging about shows, even though I have pretty much set my show critiques for my dissertation. In other words, the writing might become more unhinged/carefree than usual. I’ve got this last year left before I (hopefully) hand in/defend this beast of a thing in the spring.