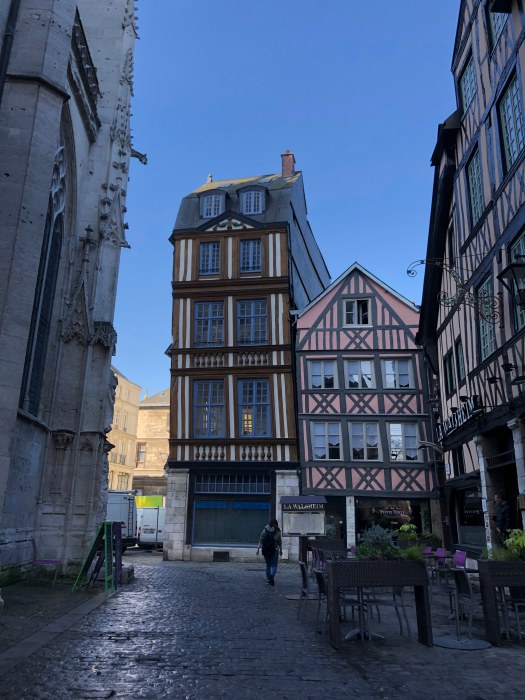 It should be a truth universally acknowledged that any teacher with a sizable pile of papers to grade (and a dissertation to continue writing) must be in want of a vacation.

Conveniently, I just so happen to be in the middle of the second of my two week work holiday (because, yes, a two week winter/ski break between the Christmas holidays and spring beak is a thing…a very wonderful thing), so even if I hadn’t ended up going anywhere, I would have at least gotten in a bit more rest than usual. Fortunately, though, trains exist, and Paris just so happens to be incredibly well-connected.

I had been pondering over the idea to take a day trip somewhere for a while, even before the holidays started, and to be frank, the unseasonably (and incredibly concerning) warm weather we had leading up and into last week only made that urge stronger. Faced with a desire to get the hell out of the city for a bit, but with absolutely no idea as to where I wanted to go, I sought out the advice of friends, one of whom recommended Rouen, a city about 1.5 hours outside of Paris. With tickets being only 20eur for a roundtrip, the choice to go was pretty much made for me. Even better: I managed to convince another friend to venture out with me.

Rouen is the capital of the Normandy region, and was also one of the most thriving and prosperous cities during the Middle Ages (this may explain why there are so. Many. Cathedrals…or not. I don’t know; I’m not a historian). It was also the place where Joan of Arc was burned at the stake, and yes, before you ask, the city does lean into that a bit. She may have been the “Virgin of Orléans”, but she died in Rouen, goddamnit.

And no, before anyone asks, we did not visit any Joan of Arc-related sites or attractions.

Other than Joan, Rouen can also lay claim as a birthplace or residency of several other notable figures: dramatist/tragedian Pierre Corneille (whose Médée is still one of the few neoclassical French adaptations of a Greek tragedy that I actually like), novelist Gustave Flaubert (Rouen also plays a pivotal role in Madame Bovary), and artist Marcel Duchamp.  Monet also spent a considerable amount of time in the city, painting, among other things, a well-known series of the Rouen Cathedral. The city’s Musée des Beaux-Arts is also quite well regarded (and conveniently free for anyone who wishes to visit the permanent collections).

There are several trains leaving from Saint Lazare that head out in that direction daily, some with a final stop in Rouen (the rest usually will continue on to Le Havre). Regardless, the TGV ride is swift and calm, and before you know it, you will have arrived at Rouen’s central train station. 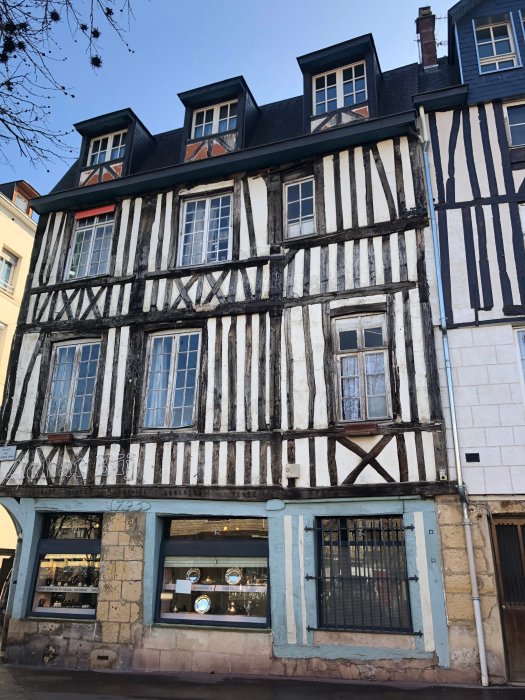 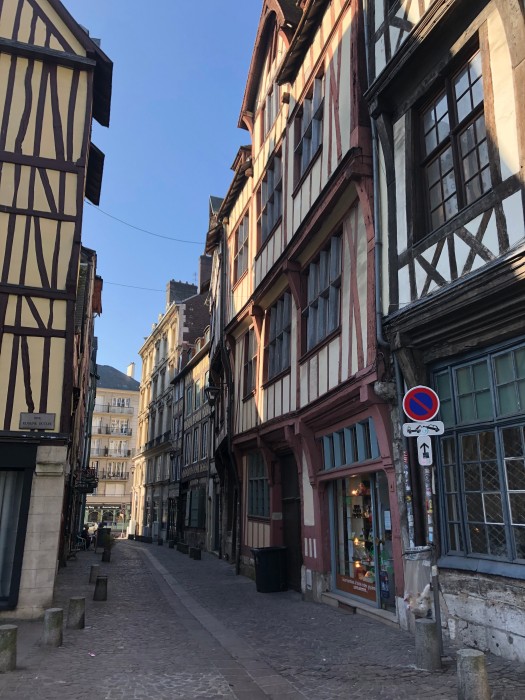 Now, despite the fact that it was once a former commercial hub, Rouen today is noticeably more calm and quiet (and more sparsely populated) than Paris. It is also much smaller than Paris, the historical center in particular, meaning that it is relatively easy to walk where one wants to go and see pretty much all the sites in one day (though I’m sure there is more to be explored…perhaps on another visit!). The historical center is absolutely breathtaking, not just in the incredibly well-preserved medieval architecture, but in the variety of colors on the building façades (think pinks, mint green, blue, basically almost any deviation from the usual ‘white walls/brown timber’ combo, though there were plenty of those as well). I, however, being a bit of a dummy, did not take photos of very many of said buildings, so…yeah. Just imagine it yourself. 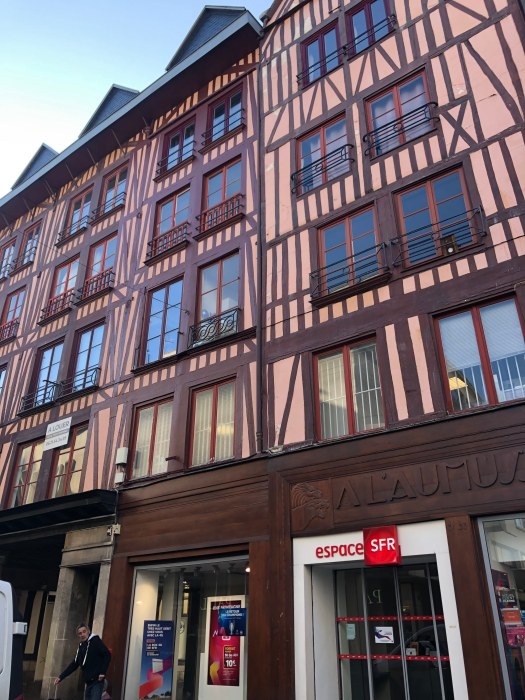 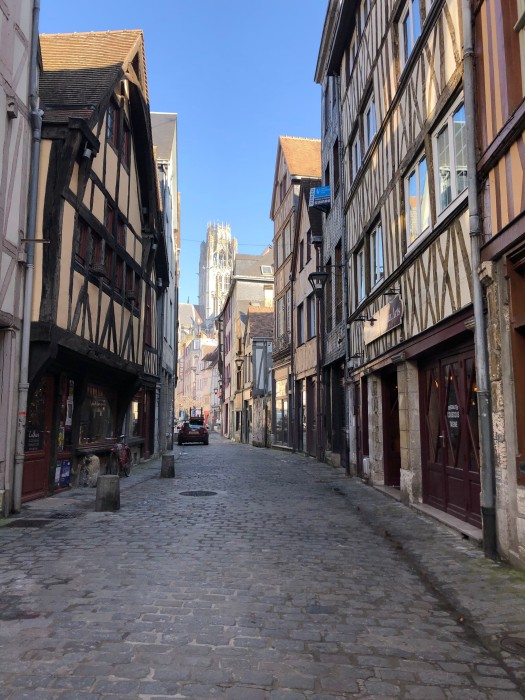 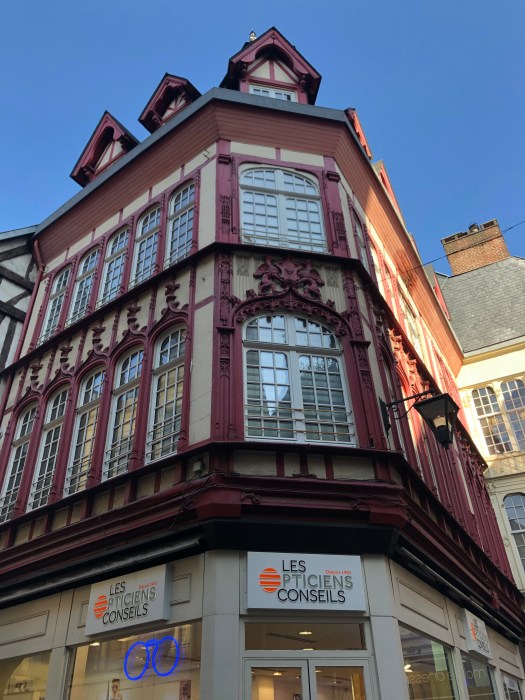 Arguably, one of Rouen’s biggest draws is its cathedral, made famous both by Monet’s paintings as well as the fact that it suffered considerable damage following an Allied bombardment in WWII (in one of their operations leading up to the D-Day landings). Unfortunately, a few of the stained-glass windows were damaged beyond repair, but the loss of a couple of windows is more than made up for by the intricate details on the front of the building. 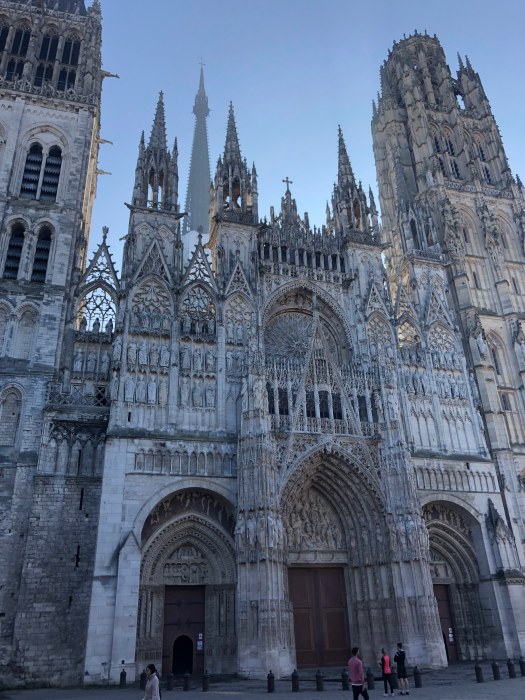 Inside the cathedral there is a self-guided (though, given that it is still actively used as a church, religiously-bent) tour on the building’s history, including some panels detailing the various periods during which the 800+ year old building had to undergo some kind of maintenance. There are also a number of tombs inside, whose inscriptions gave my friend and I an opportunity to test our skills in Latin (spoiler: we were only middlingly successful). Overall, though, I’d say that was a good way to spend the morning. 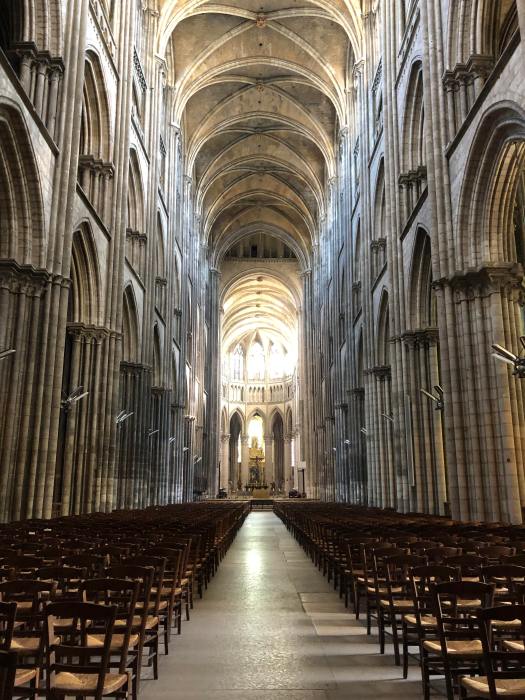 On our way to lunch, we also popped over to admire the large clock that almost every blog/travel guide post I looked up about Rouen prior to my visit had a photo of. It was very impressive. 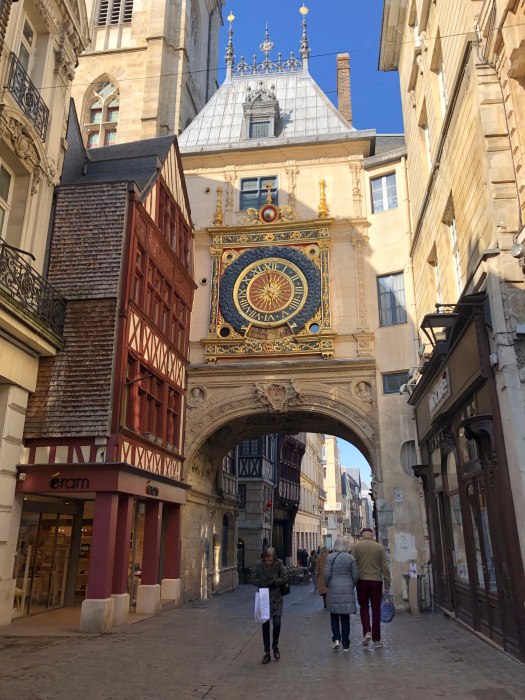 I’ll get to what we ate in the end, but before I do, some shots of what ended up being our primary afternoon activity: a visit to the Musée des Beaux-Arts (did I mention it was free??). 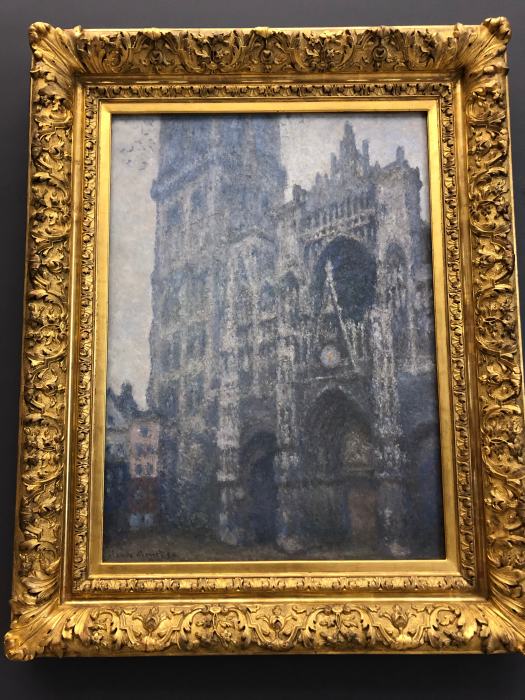 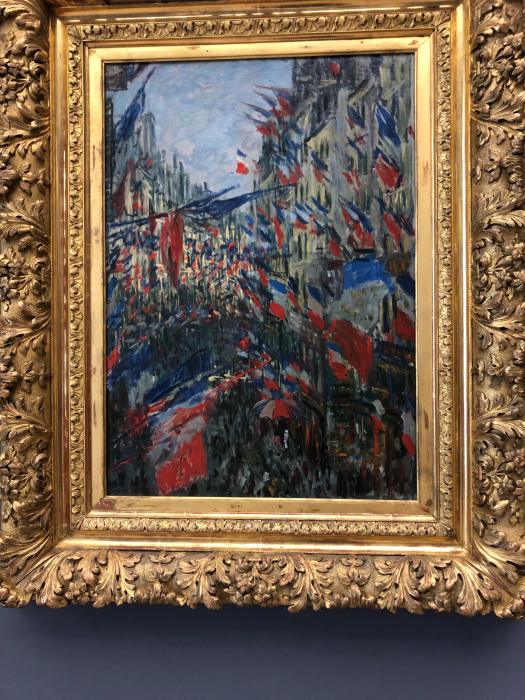 I don’t think there were any temporary exhibits on, or if there were, they weren’t ticketing them because we were able to get in to see everything (or pretty much everything…we may have inadvertently skipped one or two rooms). The museum is not particularly large, so seeing everything isn’t exactly a Louvre-sized feat. What I was most excited for, however, was the small impressionist collection. As far as art movements go, impressionism still ranks up there as one of my favorites, mostly because of how much the landscapes/environments/colors it favors contrast with my own life. If cubism–as much as I also like and admire it–inspires almost overwhelming feelings of dread knowing that WWI was just around the corner (and having a feeling that maybe the art was anticipating the violence a bit as well), impressionism brings calm, openness, a feeling of being able to breathe again. I can still recall the last time I was in Giverny close to six (!) years ago and I went to hike a bit on the hills behind the village, away from the tour groups. It was a clear day, and from where I stood, I could see all the way out to where the Seine, much wider and more peaceful than in Paris, stretched along a green valley. Insects buzzed. There was a breeze. If I perked up my ears a bit, I could hear the soft grunts of the horses roaming around in a nearby pasture. It’s easy, from a perch like that, to understand why someone would want to build a house and create art here.

Anyway, back to the museum. The collection may not be as impressive, say, as the one in the Orsay, but the advantage here, again, is that there are fewer people to deal with.

As we did not have a ton of time ahead of us after leaving the museum, the remainder of our little trip was spent walking along the river, enjoying the sunshine (even though, again, that should absolutely not have been a thing in February).

For those who want to know where (and what) we ate: 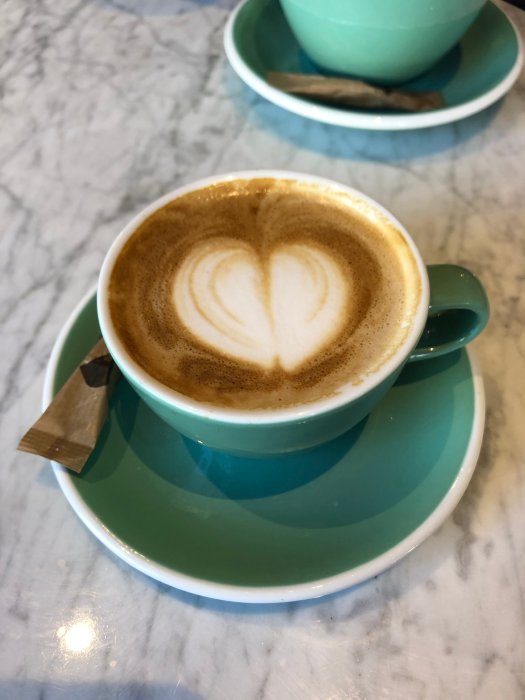 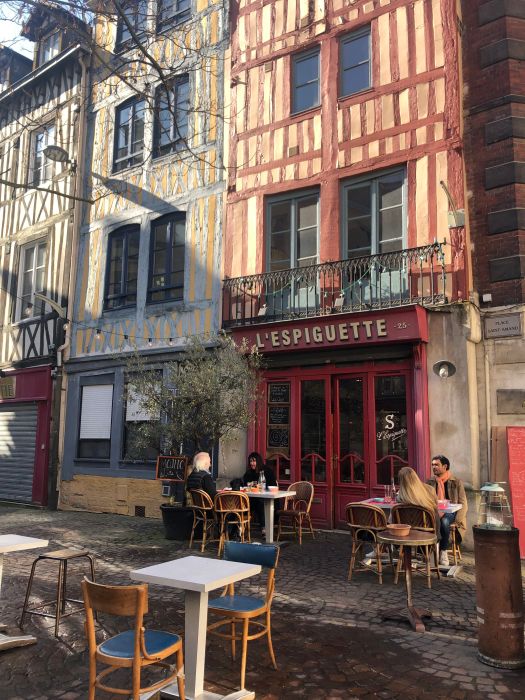 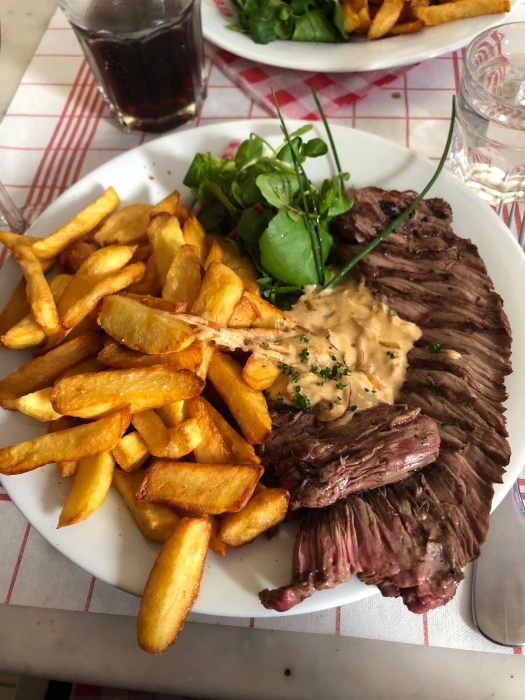 And thus ends the musings on the mini-vacation to Rouen.

Other than that, my vacation has pretty much consisted of me writing (and reading…yes, because the theoretical research never ends) and trying to push the looming thoughts of lesson planning and grading out of my mind (they’re creeping back in now, unfortunately). Thankfully, this last trimestre goes by insanely quickly, what with another two weeks off in April and May being…a weird month (a lot of random national holidays). It still never ceases to amaze me how quickly this year has been going by, especially considering all the ups and downs (and dear god were there some mental downs) that accompanied my first period of furious, financially-motivated writing.

These next couple of days are going to be slightly emotionally tricky, to be honest. In sum, a very good friend is moving away early next week. I’m not particularly good at goodbyes, especially when it concerns people I have become rather close to (and when the leaving also implies the further shrinking of my rather small social circle). This, of course, is one of the things that comes with being an expat, getting accustomed to the flux of people coming and going (and hell, I was one of those people coming and going once). I’m trying to make more of an effort of going to more things other than plays on my own though, if nothing else than to just be around people. Feed off their energy a bit, try to find other communities I might want to try and be a part of (the nice thing about being an expat, especially in a country I have no familial ties to: I can constantly readjust and reinvent myself as I see fit).

Oh, and before I go, one last bit of nonsense: